Despite everything we have come to understand about this planet that nurtures our existence, we continue to discover new forms of life almost every day. Recent analysis over the past decade of (biological archiving) has found that we are discovering about 20,000 new species of life on Earth every year. What is even more fascinating is that, not all of these new species are being found in unexplored regions. In fact, some of them are being uncovered in places where humans have colonized for hundreds, even thousands of years. 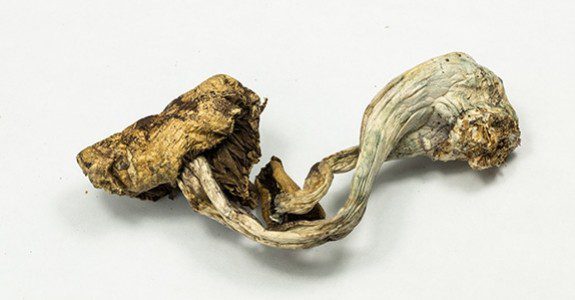 A perfect example of this is Psilocybe germanica, a recently discovered species of psilocybin mushroom that was found last year in Germany. To an unfamiliar eye, the Psilocybe germanica looks like any other mushroom – which is likely why it has gone virtually unnoticed until now. This particular strain, however, has some unique characteristics in both its physical appearance and its chemical composition. The stipe (stem) becomes drastically thicker at the pileus (cap) of the mushroom creating a strong joint between the two. “Another species with such joint-like thickening has not yet been described until now,” the researchers stated. Like most of the strains, though, the Psilocybe germanica is a quite fragile species that easily blues from bruising, frost, or age. 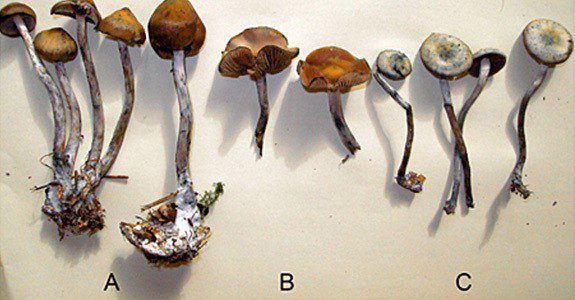 What truly sets Psilocybe germanica aside from its relatives in the Psilocybe genus, however, is its psychoactive content. The new strain is comprised of high amounts of both psilocybin, the primary hallucinogenic compound of psychedelic mushrooms, and baeocystin, a psilocybin mushroom alkaloid and analog of psilocybin. This is fascinating as most of the psychoactive mushroom species that possess this amount of psilocybin are more often correlated with high amounts of psilocyn, a substituted tryptamine alkaloid, rather than baocystin. Little is known about baocystin other than that it may cause temporary respiratory depression, something that could be problematic for an individual with chronic breathing issues.

Although it was just recently discovered, mycologists believe that Psilocybe germanica will have no issue spreading to the surrounding regions of Europe (if it hasn’t already). Its desired habitats are moist piles of mulch and wood chip, much like the ones found throughout European gardens and parks.

It goes to show that there is always more to be learned about our home planet. For anyone interested in the details of the new mushroom, the paper documenting its discovery can be found here.

My experience doing a Heroic Dose of Magic Mushrooms

The day I made the decision to quit drinking I was listening to the JRE Podcast, I remember how empowered I felt in making the decision to get sober...
Psilocybin Mushrooms