Many believe that psychedelics are the best drugs for partying. The study including people suffering from cancer proves the opposite. Patients who participated in the test described experiencing the feeling of fear, anxiety, and panic. After some time, the feeling was replaced by the positive mood that allowed the patients to have an optimistic feeling about life.

Many believe that such drugs as magic mushrooms (psilocybin), cocaine, or LSD (acid) are taken from nature. In rare cases, mushrooms can be found in nature. LSD and cocaine are made synthetically and processed into certain forms for convenient use. Ayahuasca is a traditional spiritual medicine used for centuries in Bolivia and Peru and is the only one that is 100% natural.

Psychedelics Create Holes in the Brain

This is a complete misconception. Only a trauma can create a hole in the brain. There are drug studies that indicate the relationship between using drugs and having changes in the brain structure like growth or shrinkage. However, there is no study that would prove its truthfulness and explain what really happens to the brain. 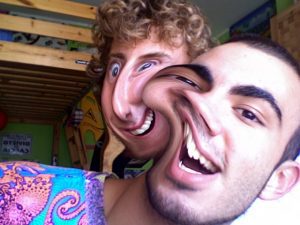 In 1967, a science research claimed that the drug produces chromosomal abnormalities. The latest studies that have been implemented by scientists from different parts of the world proved that the drug does not cause any genetic damage and birth defects.

Psychedelics Have the Same Impact As Other Drugs

This is another myth that proves unawareness of the topic. Different drugs have different effects on the brain. Psychedelics are certainly less harmful than such drugs like cocaine, alcohol, and nicotine that are considered as highly addictive. Cocaine causes euphoric sensations that can be very strong for some people, thus, can trigger addiction. Magic mushrooms change the infrastructure of the brain’s prefrontal cortex and alter the way information is exchanged in this area of the brain. In some clinical cases, taking magic mushrooms seems more positive than harmful.

Students often write research papers on this topic. In this research paper service, you can meet professional writers who will help you to create an essay or research paper on any topic related to drugs, their impact on health and society.

All Drugs “Work” for the Same Amount of Time

Different drugs create “trips” that make users feel a certain way. Magic mushrooms last the least amount of time from 3 to 6 hours depending on the dosage and individual. Ayahuasca has an effect that lasts from 4 to 7 hours. LSD causes the longest effect on the individual’s sensations and can last from 6 to 11 hours. However, some users reported longer “trips” that lasted up to 15 hours.

The Psychedelic Effect Does not Need a Further Study

It seems like numerous studies have already delivered us enough information that we should know about hallucinogens. Yet, the fact that psychedelics are used in the modern medicine and widely used for treating patients with cancer prove that the drug is still considered experimental.

All Users Have a Similar Experience

This is a common myth that brings people to try psychedelics. Some tell stories about experiencing the divine truth, having insights, and talking to spirits. Others can have a completely opposite experience. A lot of people have panic attacks that can be very dangerous since a user is not completely under control. Depression, sleep problems and psychosis can appear to any user.

There Is Always a Beneficial Effect

Everyone Should Try Psychedelics at Least Once

This is the biggest misconception and the worst advice possible. Some recommend trying the drugs to have a better understanding of the universe and life, solve problems and have a positive look on life. The above-mentioned facts prove that not everyone experiences benefits from taking drugs. There are a lot of ways of solving problems and having a better understanding of yourself and society. Meditation, traveling, or seeing a psychotherapist are the ones.

1V-LSD: The New Wave of Acid

As psychedelic research has gained public approval, multi-million dollar companies gather investment and are pushing psychedelic therapy closer to reality. This shift of psychedelics into the mainstream has been...
Psychedelics