How some doctors are risking everything to unleash the healing power of MDMA, ayahuasca and other hallucinogens

Psychedelic Miracle, how some doctors are risking everything to unleash the healing power of MDMA, ayahuasca and other hallucinogens. By Mac McClelland from RollingStone

Ayahuasca is an Amazonian plant mixture that is capable of inducing altered states of consciousness, usually lasting between 4 to 8 hours after ingestion. Ranging from mildly stimulating to extremely visionary, ayahuasca is used primarily as a medicine and as a shamanic means of communication, typically in a ceremonial session under the guidance of an experienced drinker.

MDMA, often referred to as “ecstasy” or “molly”, is short for 3,4 methylenedioxymethamphetamine, a psychoactive drug derived from safrole oil. MDMA produces effects that resemble both stimulants and psychedelics, as well as its signature effect: a feeling of connectedness. It impacts brain function primarily releasing the neurotransmitter serotonin, and also temporarily inhibits its reuptake. MDMA is usually taken orally, whether in pressed pill form, powder or crystal; or sometimes snorted.

Dr. X is a dad. Appropriately – boringly – at 4:37 p.m. on a national holiday, he is lighting a charcoal grill, about to grab a pair of tongs with one hand and a beer with the other. His kids are running around their suburban patio, which could be anywhere; Dr. X, though impressively educated now, grew up poor in a town that is basically nowhere. Like most Americans, he is a Christian. Like a lot of health-conscious men, he fights dad bod by working out once or twice a week, before going into his medical practice.

Somewhat less conventionally, two hours ago, he was escorting a woman around his yard, helping her walk off a large dose of MDMA. He’s the one who’d given it to her, earlier in the morning, drugging her out of her mind.

This would be psychedelic-assisted therapy, the not-new but increasingly popular practice of administering psychotropic substances to treat a wide range of physical, psychological and psycho-spiritual concerns. “Some people stagger out” of the room in Dr. X’s home that he uses for these “journeys,” as sessions are called in the semiofficial parlance. Some have to stay for hours and hours beyond the standard five or so, crying or waiting to emotionally rebalance, lying on a mattress, probing the secrets, trauma, belief or grief buried in their subconscious.

Dr. X recalls a patient who was considering a round-the-clock Klonopin prescription for anxiety; she reluctantly decided to try a journey instead. On the “medicine,” she spent seven hours unraveling ballistically, picturing herself dumping sadness out of her chest into a jade box that she put a golden heart-shaped lock on and tossed into the sea. She’d been skeptical going in, but after it was over, Dr. X says, “She was so angry that it was illegal.”

Because Dr. X’s hallmark treatment – an MDMA session or two, then further journeys with psilocybin mushrooms if called for – is, absolutely, illegal. MDMA is a Schedule I controlled substance. Psilocybin is as well. Exposure could get his medical license suspended, if not revoked, along with his parental rights, or freedom. “This should be a part of health care, and is a true part of health care,” he says in his defense. The oversimplified concept behind MDMA therapy, which causes intense neurotransmitter activity including the release of adrenaline and serotonin (believed to produce positive mood), is that it tamps down fear, allowing people to interact with – and deal with – parts of their psyche they otherwise can’t. Psychedelics in general are thought to bring an observational part of the ego online to allow a new perspective on one’s self and one’s memories, potentially leading to deep understanding and healing.

As an internal-medicine specialist, Dr. X doesn’t have any patients who come to him seeking psychotherapy. But the longer he does the work, the more “I’m seeing that consciousness correlates to disease,” he says. “Every disease.” Narcolepsy. Cataplexy. Crohn’s. Diabetes – one patient’s psychedelic therapy preceded a 30 percent reduction in fasting blood-sugar levels. Sufferers of food allergies discover in their journeys that they’ve been internally attacking themselves. “Consciousness is so vastly undervalued,” Dr. X says. “We use it in every other facet in our life and esteem the intellectual part of it, but deny the emotional or intuitive part of it.” Psychedelic therapy “reinvigorated my passion and belief in healing. I think it’s the best tool to achieving well-being, so I feel morally and ethically compelled to open up that space.”

Currently – legally – we’re in the midst of a psychedelic renaissance. New York University, the University of New Mexico, the University of Zurich, Johns Hopkins University, the University of Alabama and the University of California-Los Angeles have all partnered with the psilocybin-focused Heffter Research Institute, studying the compound for smoking cessation, alcoholism, terminal-cancer anxiety and cocaine dependence; the biotech-CEO-founded Usona Institute funds research of “consciousness-expanding medicines” for depression and anxiety at the University of Wisconsin-Madison. Since 2000, the Multidisciplinary Association for Psychedelic Studies (MAPS), a nonprofit based in Santa Cruz, California, has been funding clinical trials of MDMA for subjects with PTSD, mostly veterans, but also police, firefighters and civilians. In November, the FDA approved large-scale Phase III clinical trials – the last phase before potential medicalization – of MDMA for PTSD treatment. MAPS, which has committed $25 million to achieving that medicalization by 2021, also supports or runs research with ayahuasca (a concoction of Amazonian plants), LSD, medical marijuana and ibogaine, the pharmaceutical extract of the psychoactive African shrub iboga. The organization is additionally funding a study of MDMA for treating social anxiety in autistic adults, currently underway at UCLA Medical Center. Another study, using MDMA to treat anxiety in patients with life-threatening illnesses, has concluded. 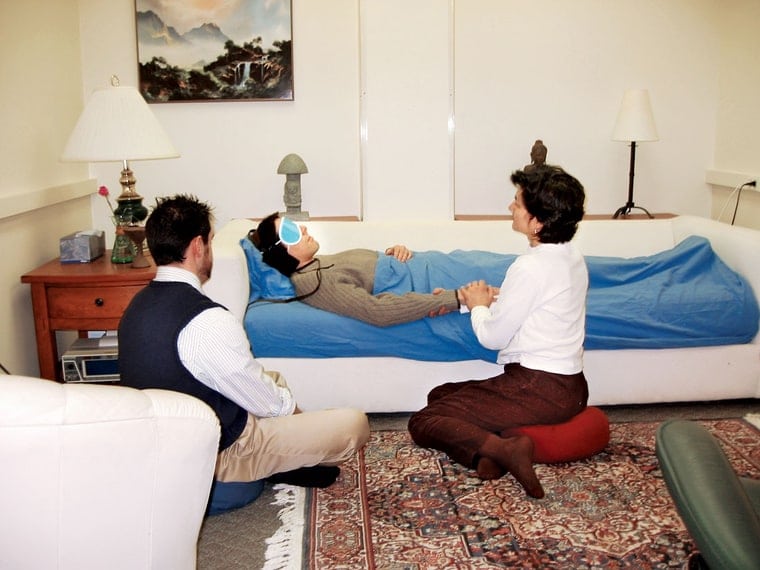 “If we didn’t have some idea about the potential importance of these medicines, we wouldn’t be researching them,” says Dr. Jeffrey Guss, psychiatry professor at NYU Medical Center and co-investigator of the NYU Psilocybin Cancer Project. “Their value has been written about and is well known from thousands of years of recorded history, from their being used in religious and healing settings. Their potential and their being worthy of exploration and study speaks for itself.”

Optimistic insiders think that if all continues to go well, within 10 to 15 years some psychedelics could be legally administrable to the public, not just for specific conditions but even for personal growth. In the meantime, says Rick Doblin, MAPS’ executive director, “there are hundreds of therapists willing to work with illegal Schedule I psychedelics” underground, like Dr. X. They’re in Florida, Minnesota, New York, California, Colorado, North Carolina, Pennsylvania, New England, Lexington, Kentucky. “Hundreds in America,” he says, though they’re “spread out all over the world.”

As within any field, underground practitioners vary in quality, expertise and method. Some are M.D.s, like Dr. X, or therapists, and some are less conventionally trained. They don’t all use the same substances, and don’t necessarily use just one. Some work with MDMA or psilocybin or ayahuasca, which has become trendy to drink in self-exploration ceremonies all over the country; others administer 5-MeO-DMT, extracted from a toad in the Sonoran Desert, or iboga or ibogaine, which, according to the scant research that exists, may be one of the most effective cures for opiate addiction on the planet – but may also cause fatal heart complications.

“Psychedelic therapy reinvigorated my belief in healing,” says one physician.

Underground psychedelic therapists are biased toward their preferred medicines, and those they think work best for particular indications. But they are united by true belief. “People that are involved are risking their careers, their freedom, in order to help others achieve a certain emotional freedom, and they disagree with prohibition,” says Doblin. “The fact that people are willing to do these therapies at great personal risk says something about what they think the potential of these drugs actually is to enhance psychotherapy.”

You can read FULL ARTICLE By Mac McClelland from RollingStone here.

Psychedelics come in many forms, doses and parts of the world. There are at least 144 types of psychedelic mushrooms alone, also roots, vines, leaves, flowers, seeds and amphibians...
Psychedelics