NASA has captured something HUGE escaping a supermassive black hole

Two NASA telescopes managed to capture the moment a supermassive Black Hole’s corona launched out of the cosmic devourer. The corona associated with Mrk 335 ejected from the black hole travelling at about 20 per cent the speed of light.

Just when you thought things at NASA couldn’t get more exciting bam… they capture a mysterious ‘huge’ mass of energy somehow escaping a ‘supermassive black hole’. Alien you say? Well let’s not get ahead of ourselves here, it is a possibility but it’s quite likely that it’s just another super rare cosmic phenomenon.

Fiona Harrison, principal investigator of NuSTAR at the California Institute of Technology in Pasadena, said: ‘The nature of the energetic source of X-rays we call the corona is mysterious, but now with the ability to see dramatic changes like this we are getting clues about its size and structure.’ 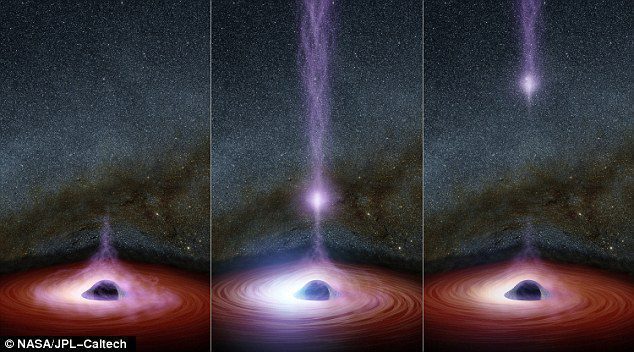 Astronomers think coronas have one of two likely configurations. The “lamppost” model says they are compact sources of light, similar to light bulbs, that sit above and below the black hole, along its rotation axis. The other model proposes that the coronas are spread out more diffusely, either as a larger cloud around the black hole, or as a “sandwich” that envelops the surrounding disk of material like slices of bread. In fact, it’s possible that coronas switch between both the lamppost and sandwich configurations.

The Nuclear Spectroscopic Telescope Array telescope (NuSTAR) and Swift telescope managed to capture the rare phenomenon in a black hole called Markarian 355, which is located just 324 million light years from Earth. This new observation helps astronomers understand how these flashes are formed and could aid in solving some of the mysteries about celestial bodies.

Astronomers say it is the first time that where it is possible to relate the ejection of the crown with a flare. This helps explain how black holes give energy to some of the brightest objects in the universe.

Astronomer’s stat that the mysterious emission was caused by ejection of its corona, which is a source of energetic particles.

‘This is the first time we have been able to link the launching of the corona to a flare,’ said Dan Wilkins of Saint Mary’s University in Halifax, Canada.

‘This will help us understand how supermassive black holes power some of the brightest objects in the universe.’

Researchers state that supermassive black holes don’t give off any light by themselves.

Strangely, according to astronomers this supermassive black hole, located at the center of our galaxy was once one of the brightest X-ray sources I the galaxy but something very strange happened 8 years ago when MRL 335 faded by a factor of 30 said Luigi Gallo an astronomer and investigator of the project.

Do you ever think about how big space is? And we don’t mean in a loose, floaty, “in all the wide universe” kind of way....
Read more

The revolutionary new technology brings is one step closer to the dream of Nikola Tesla and worldwide access to free wireless energy. Tesla was a creator,...
Read more

Is The Universe A Hologram? The Illusion Of The Third Dimension Explained

The theory that the universe may be a hologram is on the rise in the scientific and physics world. This widely speculated notion in...
Read more

40 years ago this summer, astro-physicist Gerald O'Neill envisioned that humans would be making roundtrips to other plantes for about $3000 by the end of the century. Not quite;...
Read more
Earth & Universe

NASA released 30 minutes of footage of the sun in 4K

It’s always shining, always ablaze with light and energy. In the ubiquity of solar output, Earth swims in an endless tide of particles. Every time half of the Earth faces the Sun, we experience the brightness of daytime, the Sun’s energy and light driving weather, biology and more. But...
Read more
Earth & Universe

Earth: Are we unique in the Universe?

When we are talking about our planet, Earth, we instantly think about perfection, about a creation so impressive and complex that you could spend a huge amount of time in order to understand it and you would still be able to find new things. Our planet is so well placed...
Read more
Earth & Universe

Earth’s ‘attraction’ is causing the Moon to shrink

Dear Moon, don’t let Earth attraction destroy you. The daily cycle of ocean tides on Earth is a known consequence of the gravitational pull exerted by the moon as it orbits the planet. But apparently, the force that keep the Moon where it is now have a more serious impact...
Read more