In mid July, humanity fulfilled one of his greatest astronomical ambitions, bringing a spacecraft to dwarf planet Pluto and study the planet directly from orbit. All of the data recorded by the spacecraft will take some time to get to Earth, but newly published photos from NASA are simply amazing… and we finally are able to see what this mysterious dwarf planet looks like… up close. Pluto’s ‘Heart’: Sputnik Planum is the informal name of the smooth, light-bulb shaped region on the left of this composite of several New Horizons images of Pluto. The brilliantly white upland region to the right may be coated by nitrogen ice that has been transported through the atmosphere from the surface of Sputnik Planum, and deposited on these uplands. Credits: NASA/JHUAPL/SwRI

“This image really makes you feel you are there, at Pluto, surveying the landscape for yourself,” said New Horizons Principal Investigator Alan Stern, of the Southwest Research Institute, Boulder, Colorado. “But this image is also a scientific bonanza, revealing new details about Pluto’s atmosphere, mountains, glaciers and plains.”

Thanks to the New Horizons spacecraft humanity is finally able to learn much more about the farthest dwarf planet in the Solar System. Not only has NASA managed to photograph Pluto and its surface, but the images of the dwarf planets moon are just as incredible as those of Pluto and its heart-shaped landscape. NASA is still being ‘bombarded’ with new info as the spacecraft makes its way to the Kuiper Belt.

Pluto’s Majestic Mountains, Frozen Plains and Foggy Hazes: Just 15 minutes after its closest approach to Pluto on July 14, 2015, NASA’s New Horizons spacecraft looked back toward the sun and captured this near-sunset view of the rugged, icy mountains and flat ice plains extending to Pluto’s horizon.

The newly published images of Pluto are breathtaking thanks to the close fly by the New Horizons probe made near Pluto approaching its surface at a distance of 18.000 kilometers. The result of this trip is the most detailed images of the icy surface of the dwarf planet and its incredible mountains which make you feel as if you were right there next to New Horizons, away from everything, in silence, flying next to one of the most talked about planets in our solar system. Closer Look: Majestic Mountains and Frozen Plains: Just 15 minutes after its closest approach to Pluto on July 14, 2015, NASA’s New Horizons spacecraft looked back toward the sun and captured this near-sunset view of the rugged, icy mountains and flat ice plains extending to Pluto’s horizon.

Scientifically speaking, the images beamed back by New Horizons helped researchers on Earth to analyze thoroughly Pluto’s landscape and mountains as the mysterious heart-shaped feature now a trademark of the dwarf planet. 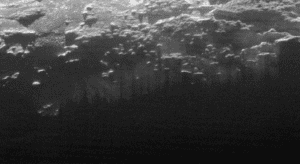 Near-Surface Haze or Fog on Pluto: In this small section of the larger crescent image of Pluto, taken by NASA’s New Horizons just 15 minutes after the spacecraft’s closest approach on July 14, 2015, the setting sun illuminates a fog or near-surface haze, which is cut by the parallel shadows of many local hills and small mountains.

“In addition to being visually stunning, these low-lying hazes hint at the weather changing from day-to-day on Pluto, just like it does here on Earth,” said Will Grundy, lead of the New Horizons Composition team from Lowell Observatory, Flagstaff, Arizona.

Mindblowing Photographs Of The Last Surviving Tribes On Earth

The 9 Personalities Which Are Changing The World

Nine distinct personality types make humanity very special, not only in their interactions with each other, but within themselves. Synchronicity ties them all together in a beautiful system that...
Earth & Universe

Is The Universe A Hologram? The Illusion Of The Third Dimension Explained