The revolutionary new technology brings is one step closer to the dream of Nikola Tesla and worldwide access to free wireless energy. 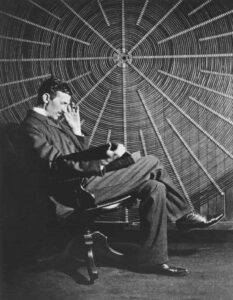 Tesla was a creator, a scientific genius and an innovator. Among his numerous inventions, Nikola Tesla dreamed of creating a technology that would allow mankind to live with the aid of free energy. His goal was to create a way to supply power to the entire planet without wires hanging around the globe.

The first system that was capable of transmitting electricity wirelessly, the Tesla Coil, was one of the greatest accomplishments of the Great Nikola Tesla, a true mad scientist’ that was eager to make life on Earth better.

Today, we aren’t living in Tesla’s Time, we are way behind schedule. In today’s world, wireless power transfer systems or WPT’s, which allow electricity to be transmitted across distances are extremely limited and are only good enough to charge cradles for phones and other gadgets. This means that the technology is incomplete, or undeveloped as it is little more than a nice feature with an extremely wide yet ‘limited’ range of electronic equipment.

The functionality of WPT systems is even more hampered since the gadget which is to be charged, needs to be placed on top of the charging pad. Moving the gadget away from the charging pad will result in the gadget not being charged, so you just might as well have it plugged in, into the wall.

According to commercial ‘wireless’ technology, wireless charging range is limited to a maximum distance of 5 metres.

Tesla, however, achieved more than that one hundred years ago.

In 1908, Tesla described his sensational aspirations in an article for Wireless Telegraphy and Telephony magazine:

“As soon as completed, it will be possible for a business man in New York to dictate instructions, and have them instantly appear in type at his office in London or elsewhere. He will be able to call up, from his desk, and talk to any telephone subscriber on the globe, without any change whatever in the existing equipment. An inexpensive instrument, not bigger than a watch, will enable its bearer to hear anywhere, on sea or land, music or song, the speech of a political leader, the address of an eminent man of science, or the sermon of an eloquent clergyman, delivered in some other place, however distant. In the same manner any picture, character, drawing, or print can be transferred from one to another place. Millions of such instruments can be operated from but one plant of this kind. More important than all of this, however, will be the transmission of power, without wires, which will be shown on a scale large enough to carry conviction.”

Today, scientists stress that part of what’s preventing the development of mainstream adoption of wireless power technologies is that today’s technology is inefficient. In 2007, a group of MIT scientists was able to power-up a 60-watt light bulb from a distance of two meters in order to demonstrate the feasibility of WPT Systems, but they were only able to do so at a 45% transfer efficiency.

However, a team of researchers from Russia have created a new WPT system that allows a much better transfer.

This technology brings is one step closer to the dream of Nikola Tesla and worldwide access to free wireless electricity.

In the study published in Applied Physics Letters, the newly created system is able to maintain a staggering 80% of transfer efficiency while sustaining it at a distance of 20 centimeters with little to no loss associated with further distance. The new system has nifty improvements as well. According to researchers, the system is able to operate when the power transmitter and its received are in misalignment with an efficiency of 70% at a misalignment of 90 degrees, meaning that it is able to maintain its functionality when the transmitter and received are not facing each other at all.

The new system is based on resonance coupling. Resonance coupling functions by inducing two copper coils to resonate at similar frequencies, allowing energy to transfer between each other. According to reports, this is accomplished with the help of magnetic fields to ensure that magnetic fields from sources like the human body do not interfere with this frequency and prevent energy transfer. Researchers were able to accomplish a higher efficiency thanks to the use of “high-permittivity low-loss dielectric resonators” instead of traditional copper coils.

Researchers report that the new material has a higher refractive index which basically allows it to slow down electromagnetic waves travelling through them. This, in turn, allows the receiver and transmitter in the WPT system to have a stronger resonance, developing frequencies closer to that of each other and increase its efficiency.

This technology brings is one step closer to the dream of Nikola Tesla and worldwide access to free wireless electricity.

Are you ready for the future?

For any critics who say a country can’t receive 100 percent of their energy from renewable sources,Germany offers a rebuttal. The country has made headlines for its renewable energy...
Earth & Universe

NASA has captured something HUGE escaping a supermassive black hole

7 Signs You Are Experiencing Real Synchronicity

Nikola Tesla: The man that boosted the course of human evolution.