A History of Psychedelics

Originating in the 1960s, as a thriving part of the counterculture havens of San Francisco and New York, psychedelics have long remained immersed in the recesses of the shadow economy. Thriving in an outlaw community of hippies, free thinkers, innovators, college students, music aficionados, and drug dealers. Owsley Stanley and his friends ushered in the psychedelic movement in 1965 when they started making and distributing LSD, almost exactly at the same time as the military escalation in Vietnam, and the violence associated with the Civil Rights movement. It was an extreme time that led to extreme measures.

Owsley funded the Grateful Dead with his LSD profits and woke up American minds, showing them an alternate way that rejected the social repression they were witnessing in the turbulent 60’s. The rising use of LSD and marijuana by the counterculture provided fuel for the underground movement that rocked America’s consciousness. Still manifesting itself today in the form of New Age practices, Anonymous hactivism, advancing technology and the urge to be enlightened. Unintentionally psychedelic culture has permeated the mainstream through Silicon Valley, the art world, music and modern business practices. 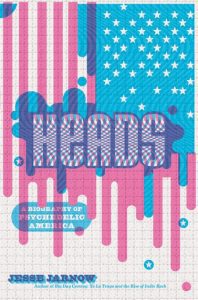 In his new book, Heads: A Biography of Psychedelic America, author Jesse Jarnow explores how people use LSD for ideas and then take their ideas to the world, fostering a sort of psychedelic renaissance that overlaps the tech, music and art spheres that have transformed our society. Jarnow claims people journey to the nether zone of psychedelics, absorbing ideas and then vamoosing to share their discoveries with the world. I spoke to Jarnow about his new book, psychedelics in America and how the heads spawned from the LSD underground have influenced pop culture, business and the way we live our lives today.

How did Heads come about?
Jesse Jarnow– I wanted to write a book about the impact of the Grateful Dead on American culture, and the more I thought about that, the more it seemed inseparable from the bigger story of how psychedelics fit into the bigger history of the United States. It took a long while to be able to frame it quite like that, and I wrote another book in the meantime, about the band Yo La Tengo. But once I began to think about the story of psychedelics and the Dead as completely entwined, I realized that it was a really important story that nobody else had really told, except in parts, and kind of the story I’d really wanted to know since I discovered the Dead and, sort of through them, psychedelics.

What did you learn writing the book that you didn’t know before?
When I started, I knew the general shape of what I wanted to cover, and some of the stories I wanted to feature, but a healthy percentage of the specifics in the book were new to me. One of the biggest threads that was new to me, and continues to blow my mind, was the connection between LSD dealing, Central Park, and some important early graffiti artists. One was Chad Stickney, who was writing from the late the ‘60s, but from 1972 on as LSD-OM, really gorgeous stuff. He was one of the Park’s first contacts with the Brotherhood of Eternal Love, and he was incredibly articulate about how LSD was related to his graffiti.

How did Heads influence pop culture and business?
I differentiate between psychedelics, the substances people take, and psychedelia, the art and thought that tends to follow psychedelics themselves. There’s a strong correlation, of course, but either can exist without the other, too. I think of heads, though, as the people that translate psychedelics into the psychedelia of pop culture and elsewhere. Musically and visually, it was a pretty obvious strain that made its way into the global vocabulary by the early ‘70s. But I think heads probably impacted both those worlds in deeper ways, in terms of thinking less hierarchically and more holistically about the world. Stewart Brand’s Whole Earth Catalog, with it DIY “tools for access” was a big influence on the computer industry, but also an influence on creative thought in general.

What is the relationship between LSD and music?
I’m not sure there’s any one relationship, but a good deal of it has to do with what I mentioned above, about heads translating psychedelics into psychedelia. In that regard, music can certainly be an expression of LSD, either a long-term conceptual influence or—in the case of bands like the Grateful Dead and the 13th Floor Elevators—performing the music while tripping, an actual real-time influence, as well, which is a whole other type of creativity. And then there’s the relationship of simply listening or dancing to music on LSD. According to the recent study from Beckley Research, music and LSD in combination seems to have a measurable power as an agent of personality change. In all types, there is the blurring of the senses, maybe synaesthetic, maybe not, and a removal of boundaries between listener and music, and perhaps even a removal of boundaries between participants in the audience or in the music-making. LSD transforms any activity, but it sometimes seems to transform music most profoundly.

What is up with LSD culture today and where does it exist?
After the LSD drought of the early 21st century, other psychedelics—specifically mushrooms—surpassed LSD as the most-used psychedelics in the United States. Psychedelic America has become a much wider place in the past decade and change. LSD culture exists in the same places is always did, in the Deadhead universe and out on the weirdo fringe, now manifesting itself on the dark web, sometimes all crossing over one another. But a more scholarly form of LSD culture also exists in increasingly respectable places, an outgrowth of the past decade of scientific research, in conferences and serious discussion groups. Even as Psychedelic America broadens, though, I think some of the basic utopian hippie deals of the earliest head culture continues to really inform and define it, in mostly good ways, but some probably bad and stigmatic, too. LSD culture doesn’t quite exist everywhere where there’s LSD, but that’s certainly a good place to look.

What’s in my Baggie ? Documentary on Psychedelics

The psychedelic culture has grown exponentially over the years, even though the scene is mostly underground and not exactly mainstream as yet. Literally millions if not more, experiment with...
LSD

The Strange History of LSD – An Educational Film

Culture is Not Your Friend: Terence McKenna’s Radical Perspective