Manuals To The Afterlife: The Tibetan And Egyptian ‘Books Of The Dead’

Two of the world’s most important spiritual texts from the past are the Egyptian and Tibetan ‘Books of the Dead’. Detailing spiritual concepts of this life and the next, these books offer valuable wisdom to those on a spiritual journey. These two entirely different scriptures were written in completely different areas, but both describe a process through which one may transcend from this plane of existence into the next. Written in the 18th century, the Tibetan Book of the Dead acts as a guide for the dying. However, the Egyptian Book of the Dead was written over 4000 years ago as a guide for the afterlife, and may actually be the oldest spiritual scripture in existence. Written approximately 1,200 years ago, the Tibetan Scriptures give an eerily similar account of what people have reported to see after a near-death experience and those undergoing a psychedelic experience.

The ancient Egyptians believed in an infinitely intricate afterlife. Each Pharaoh was expected to resurrect in another world and the Egyptian book of the dead would act as their guide. The book was in the form of scrolls depicting certain events that would take place after death and spells that would help them during the stages of the journey from the physical world into the Egyptian ‘heaven’. 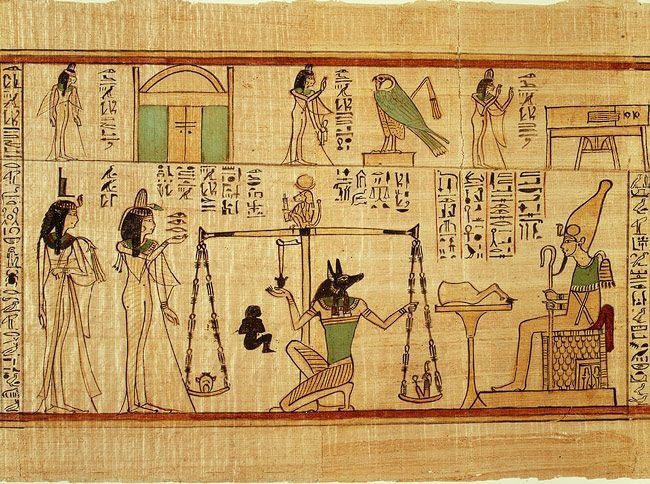 The chief purpose for the Egyptian book of the dead was to enable life after death and thus immortality of the Pharaohs and normal class Egyptian citizens. However attaining one of these scriptures came at a heavy price financially. The cost was high but to some it was very important because it was a quest for immortality. It was believed in ancient Egypt that actions placed more importance on the life after death then the existence on Earth. It was during the age of prominence in Egypt that normal citizens began questioning their existence and philosophies regarding the afterlife. A conclusion was that without a proper burial and ceremonial preparation for immortality, the soul would not transcend to an immortal state.

Many steps were taken during one’s life to ensure everything needed during the afterlife journey was included in the tomb, especially the Egyptian book of the dead, that would be that would ensure a successful transition from this life into eternal paradise. Each scroll contained 65 prayers and magical spells along with 150 colorful illustrations that when unrolled would measure an incredible 78 feet, depending on the quality and detail included by the scribe. These books were not easy to come by, but to many were necessary in order to reach immortality. 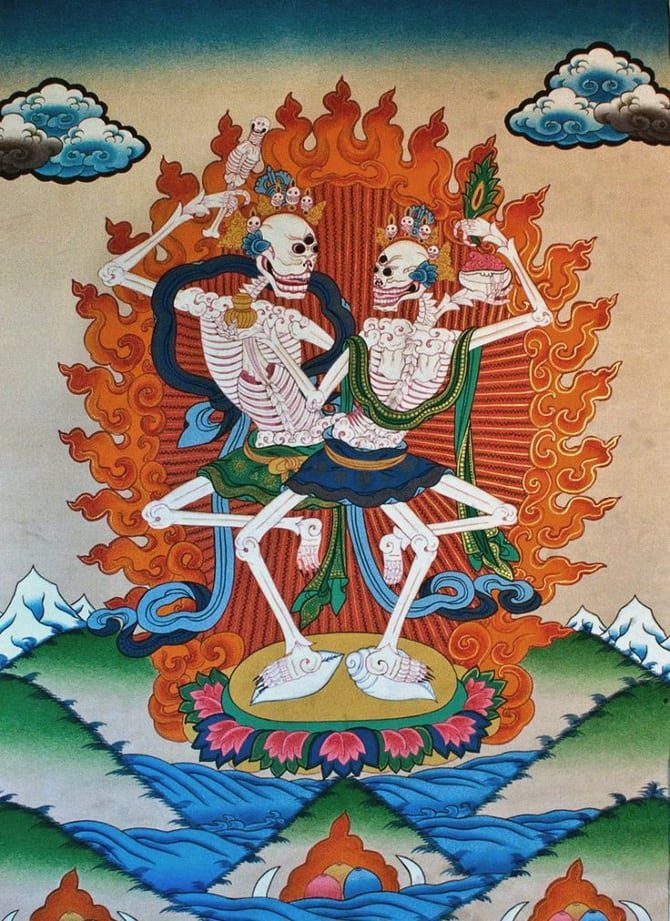 Citipati, Lords of the Cemetery. Bardo Thödol. Tibetan Book of the Dead.

Similarly, the Tibetan book of the dead was intended to act as a map for the journey one faces in the journey to the afterlife. Alternatively, included in this book is universal wisdom that can be attained by all who read it. For the living, it offers a tool to attain psychological freedom during this lifetime, and for the dead it offers instruction that will lead the deceased through the various bardos, or intermediate states between life and death.

Death is humanity’s greatest mystery; the land of the unknown. Tibetans believe they know exactly what happens after death. The answers came by way of the 1200-year-old Book of the Dead. This book is said to provide to everyone a guide to find ultimate meaning in this life and after the death experience. For centuries this book was kept secret in an isolated and land known as the “Forbidden Kingdom” located in what we now know as the Himalaya Mountains. Only relatively recently has the book become available large-scale to the public.

The Egyptian Book Of The Dead Full Documentary

Written by Graham St John (PhD, Anthropology) When in 1967, aged sixteen, Dennis visited his older brother in Berkeley, California, Terence stated that he knew what the philosopher’s stone was. “It’s sitting in that jar right there on the bookshelf.” Earlier, in the Fall of 1965, Terence McKenna had been visited...
Read more

What Does DMT Feel Like? Putting Words to a DMT Experience

“Under the influence of DMT, the world becomes an Arabian labyrinth, a palace, a more than possible Martian jewel, vast with motifs that flood the gaping mind with complex and wordless awe.” – Terence McKenna Ask someone about what their DMT experience was like, and you are likely to get...
Read more

Such type of places could give you answers to long asked questions and make you feel the truth of reality on a more spiritual level. There are dozens of spiritual places like this all around the world. However, we want to know what’s the most spiritual. Where is the...
Read more

Written By Alex Gearin (PhD, Anthropology). When a Cambridge University researcher took a famous ayahuasca shaman to his first cinema experience, the Yaminahua shaman José Choro concluded that the cinema “was not as good as...
Read more
DMT

DMT or Dimethyltryptamine is a chemical compound produced naturally in the pineal gland inside your brain that belongs to the tryptamine family. This naturally occurring substance is produced and excreted by the pineal gland during sleep and is structurally similar to serotonin. It is found in both animals and plants and is pretty much...
Read more
Psilocybin Mushrooms

Over the past few years, there have been many studies devised for the purpose of assessing the therapeutic potential of psilocybin, a serotonin receptor agonist that is naturally found in various species of mushrooms. Researchers have investigated the efficacy of psilocybin in treating various conditions such as substance addiction,...
Read more
Wisdom

Scientists Discover What Meditation Does To Your Gut & Your Brain

Numerous studies have indicated the many physiological benefits of meditation, and the latest one comes from Harvard University. An eight week study conducted by Harvard researchers at Massachusetts General Hospital (MGH) determined that meditation literally rebuilds the brains grey matter in just eight weeks. It’s the very first study to...
Read more