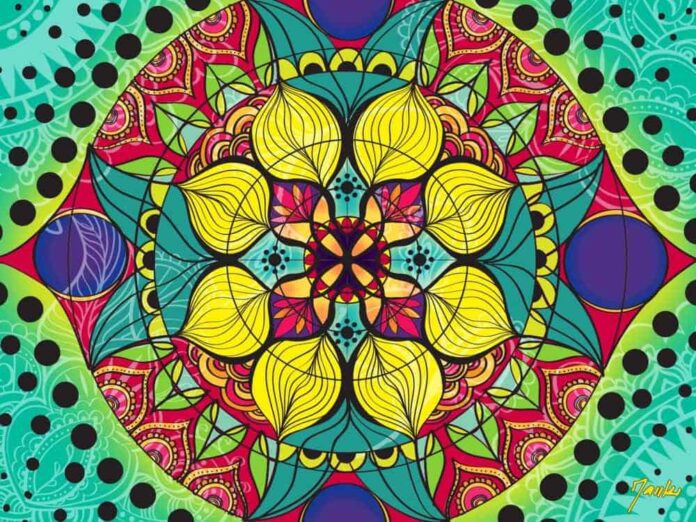 The art of painting with sand is an expressive practice that has been utilized by many cultures, for example in local festivals by South Indian women, and by Australian aborigines. Tibetan Buddhist monks in particular are masters of this art form, known for creating inspiring sand mandalas which are subsequently destroyed to represent the impermanence of life.

It is this that inspires New York City sculptor Joe Mangrum, who has taken on components of this form in his monumental free form sand paintings.

Mangrum has completed over 650 pieces of this art, each spanning up to 20 feet in diameter, in both galleries and public spaces such as Union Square in New York City. It can take countless hours to finish one of them, as each line of color is a distributed from a handful of sand. Works are inspired by nature and sacred geometry.

The artwork is self-characterized as “visual rebellion” against the “urban grid;” indeed there is a theme of nature vs. city and living vs. artificial in the pieces, and a desire to synthesize these dichotomies. In his bio, he states:

It’s my philosophy that we are all unknowingly and psychologically programmed by this system, a dominating force that efficiently partitions the globe into quantifiable sections of space and time, divided by minutes and seconds. It is ultimately out of sync with the natural world, seasonal cycles and lunar tides.

The result is a society divided from nature and compartmentalized into definable groups, disconnected physically, and spiritually from the whole. I work to reclaim these divisions by creating sand paintings, in organic shapes, interconnecting the fragments and acting as a catalyst for a synthesis, again. For me this is a vital process of affirming life.

Not only are the sand paintings a practice in spirituality for Mangrum, they are also a political statement. The grains of sand are all simply their own separate mini universes, as he told Chicago Tonight: “Each grain really represents a being or living thing, you know? Metaphorically, then you’ve got billions of living things and they’re all working together to create something beautiful.”

The gray of the city pavement is therefore broken by the lively expressions of his glyphs, which reconnect one to a greater wholeness and beauty. You can see more of his work here, his website and on his Facebook. The video below is a nice glimpse in to the process.