Melanin, Fluoride and the Pineal Gland

Melanin is a molecule which derives its name from the Greek word, Melanos, which denotes the color black. Melanin is the fundamental unit of the universe and can exist in four forms including Cosmic Melanin, Planetary Melanin, Plant Kingdom Melanin (chlorophyll) and Animal Kingdom melanin (black pigmentation). 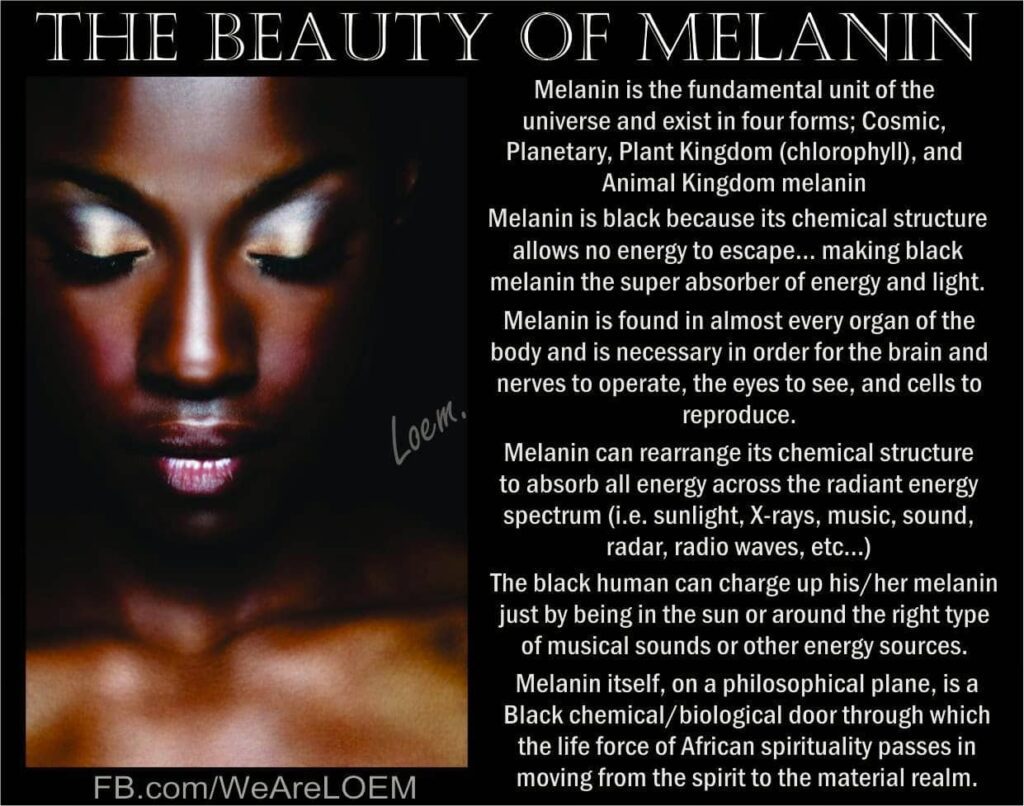 • The main functions of melatonin are the modulation of the synthesis of melanin, maintaining the sleep wake cycle and biological rhythms in the body, whereas that of melanin are providing skin color, photo-protection, and involving in hearing.

The following text is from the youtube channel, 211 Network who’s video is featured below in this post …

Time and conflict have conditioned us to fear what we do not understand. And our misunderstanding has been based on a lack of knowledge; of others, and of ourselves.

Getting to the core of truth about the human condition in an objective manner, one can shed light on facts that have been kept in the dark, and attain a higher understanding of truths Indecency and hatred have no place in a world of pure knowledge and understanding.

For at least a century, people have tried to preach equality for all, crusading based on the premise that we are all the same. Some vouched for fairness by insisting we are “created equal.” It seems as if it were only those who wished to keep peoples of the world separate that would cite and declare our differences. And though they, at times, brought forth dishonest claims, they reign successful in keeping peoples apart to this day.

The truth is we are alike in the sense that we all have common ancestry. This is proven. We have a shared ancient heritage, even with our wide array of lineage. But we are different, a truth we must accept and discuss openly with one another. In the classroom, the household, governing bodies across the globe, and possibly the cosmos, et al.

The following is an example of employing an objective approach toward one of the biggest indications of our differences — skin colour; melanin being its primary determinant.

The topic of skin colour affects all of us. And even in today’s world where we are coming together more than ever through social media, internet and overall the advent of technology, the colour of our skin remains a “touchy-untouched” subject because of our unwillingness to fully accept, examine and embrace our differences. That, plus the fact that melanin is a natural substance found in all of us, is the reason the example is used.

The following clip, an excerpt from a documentary called “Hidden Colors 2: The Triumph of Melanin”, serves as one example of our potential to go beyond what history dictates about a characteristic of a people — looking objectively and without bias at the physical, undeniable, provable traits posessed, with the characteristics serving as mere indication — to in turn celebrate what makes humanity strong and determine where our weaknesses lie.

The film is not a reflection of the ideals of the uploader. One must admit that the documentary presents a black versus white dichotomy, a mindset that subtracts from the very idea behind the presentation of this clip to you, the viewer.

So that said, The.211Network asks that you heed the message within the message. That message being that humanity can abandon the “a priori” approach to judging people — if we are even to judge. The message is that our differences, when explored, can open our eyes to the human condition; its brilliance and resilience, the make-up of our collective . And when the knowledge gained is taught and applied universally, the world and its inhabitants can be at least a little better for it.

Go beyond what the historians teach and what religions preach. Go beyond indoctrinated science and political etiquette. Go beyond the system employed. Go beyond, by regressing to true reason.

It is apparent that there is a vast amount of knowledge about ourselves and our potential that is not as accessible. You each have a short amount time to realize your full potential. And ignorance could be bliss, but you owe it to yourself to know what you are missing.

Dr. Booker Coleman on Melanin and the Pineal Gland

Ancient Knowledge and Consciousness of the Third Eye

And this video is just mind blowing !!! In short, it speaks about the Secret Science of Melanin and the Age of Transformation and Evolution … we are evolving from a Carbon 12 based life form to a Carbon 7 based being … Exciting Times Indeed !

We are in the timeline of big change …

What happens in the pineal gland when we use cannabis?

Everything You Wanted to Know about the Pineal Gland