Scientists find that Ayahuasca, a hallucinogen from the Amazon, stimulates the birth of new brain cells.

Our collaborator Dr Jordi Riba presented these ground-breaking results at the Interdisciplinary Conference on Psychedelics Research last week in Amsterdam.  The results are, as yet, unpublished but you can have a sneak peak at the slides from Jordi Riba’s presentationhere.

The study was conducted within the framework of the Beckley/Sant Pau Research Programme and in collaboration with the Spanish National Research Council. In the study participated the following researchers from the Spanish National Research Council (CSIC): Jose Morales-García, María Isabel Rodriguez-Franco, Ana Pérez-Castillo and Mario de la Fuente Revenga.  They found that harmine and tetrahydroharmine, the alkaloids present in highest amounts in ayahuasca, stimulate the growth and maturation of neurons and promote their birth from the stem cells.

For a long time, a dogma has persisted that no new neurons are born in the brains of adults. Since the late 1990’s, this dated paradigm has been challenged by experimental evidence. The birth of new neurons, known as neurogenesis, occurs in two brain areas: around the ventricles and in a region of the hippocampus. The hippocampus plays a key role in important cognitive tasks such as learning and memory. Its function declines with the normal aging process, but does so much more dramatically in the presence of certain devastating neurodegenerative disorders such as Alzheimer’s disease and other dementias.

This is the first study ever conducted that demonstrates that components of the Ayahuasca brew have potent neurogenic properties.  Although the results are preliminary, they show that the addition of harmine and tetrahydroharmine to cell cultures containing neural stem cells dramatically increased their differentiation, and their maturation into neurons.

We are currently conducting additional experiments to discern the magnitude of the observed effects, as well as undertaking studies on live animals.

The replication of the present findings in vivo would open a totally new avenue of research for ayahuasca and its active principles. Potential applications would range fromtreating neurodegenerative and psychiatric disorders, to redressing brain damage associated with stroke or trauma.

Watch the space for latest updates on the progress of this study.

By Amanda Feilding
Director of the Beckley Foundation and Co-director with Jordi Riba, of the Beckley/Sant Pau Research Programme

Jordi Riba explains the latest findings, illustrating them with the beautiful images below

What you are seeing is a “static picture” taken after several days of treatment of the stem cells with the different compounds. No neurons were present prior to the three different tretments: a) saline (water+salt); b) harmine; and c) tetrahydroharmine. 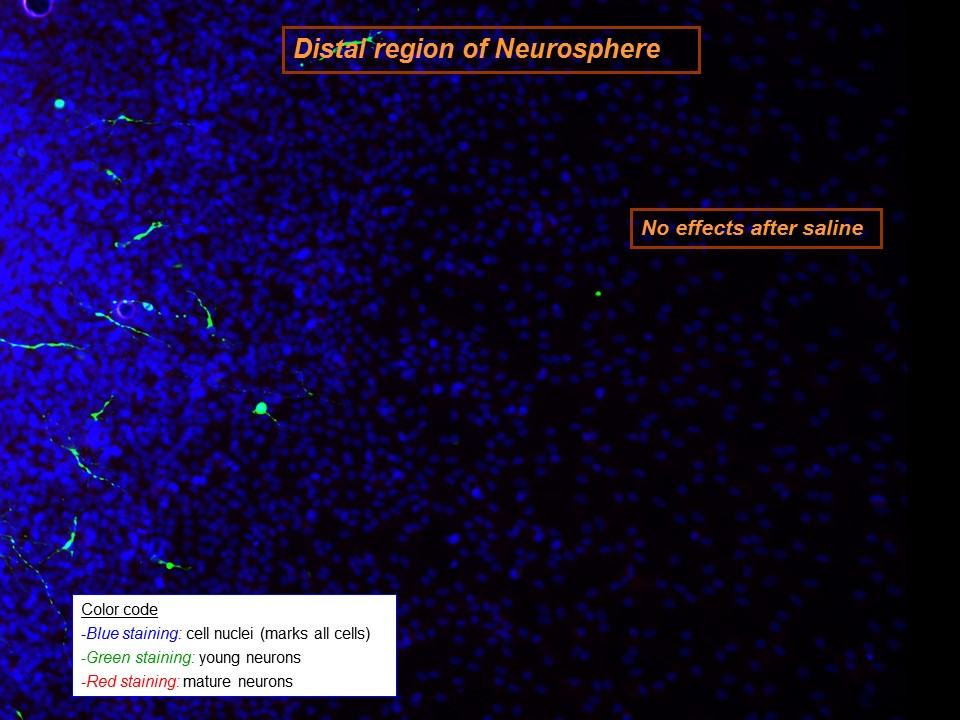 The first image is the control, when only salty water (saline) added to the cell cultures. The nuclei of the stem cells can be seen in blue.These stem cells have been treated with saline for several days and only a few have developed into young neurons (the few green sports in the image). 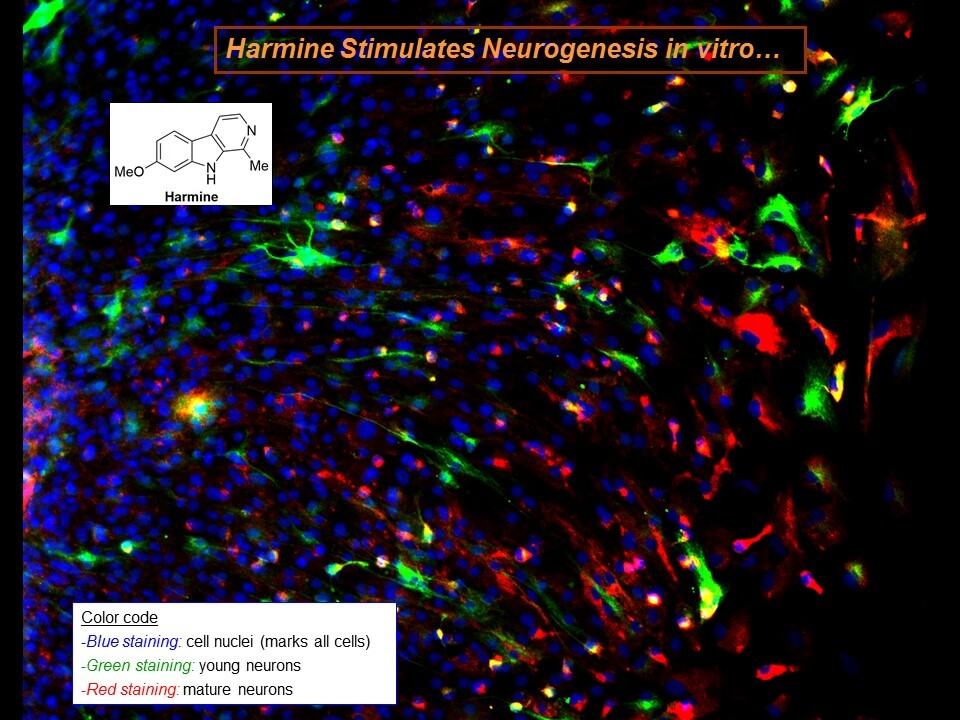 The second image shows the results after several days of treatment with harmine: blue is still present because it’s a marker of cell nuclei, and all cells have nuclei (stem cells and neurons). The green spots are the young neurons marked using Tuj1 staining (this staining is specific for “neuron-specific class III beta-tubulin) present in recently created neurons. The red spots show more mature neurons. The staining marks the “microtubule-associated protein 2 (MAP-2). Its presence increases during neuron development. 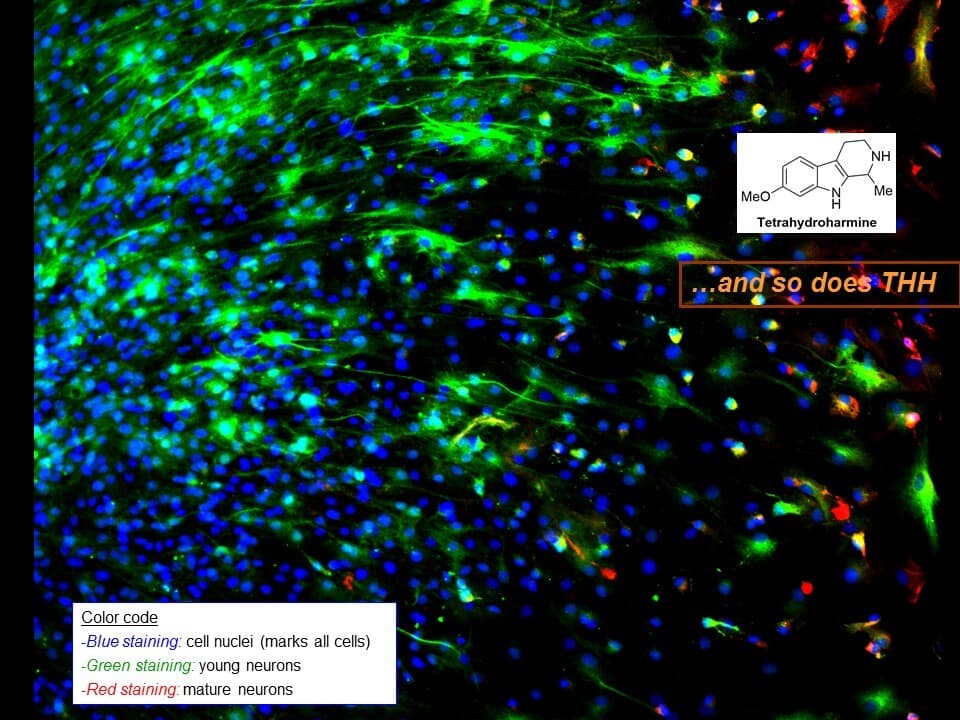 The third image shows the results obtained after several days of treatment with tetrahydroharmine. The meaning of the colors is the same.

The images from the Beckley/Sant Pau collaboration showing the birth of new neurons are very interesting and suggest that ayahuasca could lead to a new approach in the treatment of neurodegenerative conditions such as Alzheimer’s and Parkinson’s, among others.Amanda Feilding, co-director of the Beckley/Sant Pau Research Programme

Head of the  Human Neuropsychopharmacology Research Group at Sant Pau Hospital in Barcelona and a co-director with Amanda Feilding, of the Beckley/Sant Pau Research Programme

If you found me and you're reading this, I'm guessing we have a lot in common. Who knew 25 years ago that coaches, not doctors, would be the ones...
Wisdom