It is no secret that psilocybin is capable of incredible psychiatric feats, but there remains much mystery as to how it performs said feats.

Psilocybin, the entheogenic compound found within psychoactive mushrooms, is coveted for its ability to bestow imbibers with vivid hallucinations and unexplored avenues of thought. For millennia, psilocybin mushrooms have been used for spiritual purposes, with early evidence such the 6,000 year old cave paintings of mushrooms found in the Selva Pascuala cave, Spain, as well as Saharan cave paintings dated back to 7,000 BCE that depict ceremonial activity involving mushrooms, and much more. 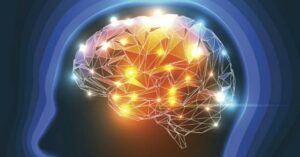 It is no secret that psilocybin is capable of incredible psychiatric feats, but there remains much mystery as to how it performs said feats. Researchers have known for some time that the psilocybin compound binds itself to serotonin receptors in the mind, which are responsible for regulating appetite, mood, and sleep, though this understanding does not offer an explanation of the novel and indescribable experiences produced by psilocybin. In a past study, it was concluded that psilocybin decreased brain activity resulting in a sort of dreamlike state, but further research has found this to be only a partial explanation.

A more recent study, conducted at King’s College London, has found that psilocybin does seem to disrupt normalcommunication networks in the brain, hence the decreased activity. However, fMRI scans showed that, while some of the brain decreased in activity, the psilocybin somehow connected “brain regions that don’t normally talk together,” said Paul Expert, study co-author and physicist at King’s College London. The findings, which has been published in the Journal of the Royal Society Interface, now serve as an important piece to the puzzle of a complete understanding of Psilocybin’s medicinal capacity.

For the study, the team had 15 healthy volunteers that would participate in two sessions, one with a placebo and the other with the hallucinogenic psilocybin. During each of the sessions, the individuals received fMRI scans to monitor the brain’s activity. The volunteers consisted only of people that had reported previous positive experiences with psilocybin as to prevent any sort of panic while inside of the MRI machines.

After a comparative analysis of the brain activity both on and off the effects of psilocybin, the team saw that the substance drastically altered each participant’s brainwave organization. While on psilocybin, unconnected regions of the brain showed activity that were synchronized tightly in time; long-range connections that the brain is ordinarily incapable of. After the psilocybin had run its course, brain activity returned to normal. The researchers determined that rather than a dreamlike state from reduced brain activity, psilocybin seems as though it creates a brain state similar to that of synesthesia, a sensory condition in which certain sense stimuli are paired with another. For example, a synesthesic mind may see vivid colors when listening to certain music or, say, always see the number 5 in the color blue.

These findings are proving helpful for those researching psilocybin as a treatment for depression, Expert said. Though many previous experiments have shown that most individuals tend to be happier even after just one use of psilocybin, a more finite understanding of exactly how psilocybin impacts the brain is needed before it can be recognized as a pracitical method of treating depression.

“Through studies such as these we can really begin to tackle the questions of how we achieve coherent experiences of ourselves in the world around us, and understand what makes this break down,” said Mitul Mehta, a psychopharmacology researcher at King’s College London, who was not involved in the study.

There is an estimated total of 800,00 plants growing on this planet right now and of them 120 are classified as hallucinogenic. There are also at least 144 species...
Psychedelics