Psychedelics in the Modern World

From the beginning of the 20th century there has been a resurgence of interest in what has traditionally been referred to as shamanism, which for the purposes of our discussion we’ll define as the ritual ingestion of psychoactive plants and compounds to produce a state of visionary consciousness, ego-dissolution and communion with self/god.

The first explorations into psychedelics in the west were seen in the form of the hashish eaters, colonial mean and women who went to the Middle East and India and who stumbled across cultures where the use of marijuana had been a feature for thousands of years. They returned with stories of consuming pure hashish, and seeing visions of arabesques and bizarre landscapes.

In the early 20th century R. Gordon Wasson studied the ethnic use of psychoactive mushrooms and to a lesser extent yagé, or ayahuasca as it is more commonly known. Not long after these initial forays into the territory of real psychedelia, a small-time chemist by the name of Albert Hoffman was working on an unrelated project when he stumbled across the compound Lysergic-Acid-25, or LSD. Spilling it on his skin accidentally, he was treated to a “pleasant intoxication” and soon after sought to study the effects of the drug.

Not long after this, LSD made its way into Western psychotherapy, where Humphrey Osmond, Timothy Leary, Richard Alpert (now Ram Dass) and others began to study the effects of the chemical on mood, perception and cognition. What they found was remarkable; Leary’s experiments showed that LSD could reduce recidivism rates in prison populations and under the appropriate circumstance produce the traditional mystical experience of union with the godhead.

Other studies showed an effectiveness in treating addiction, childhood autism and surprising efficacy in heightening creative and logical ability in artists and technicians. 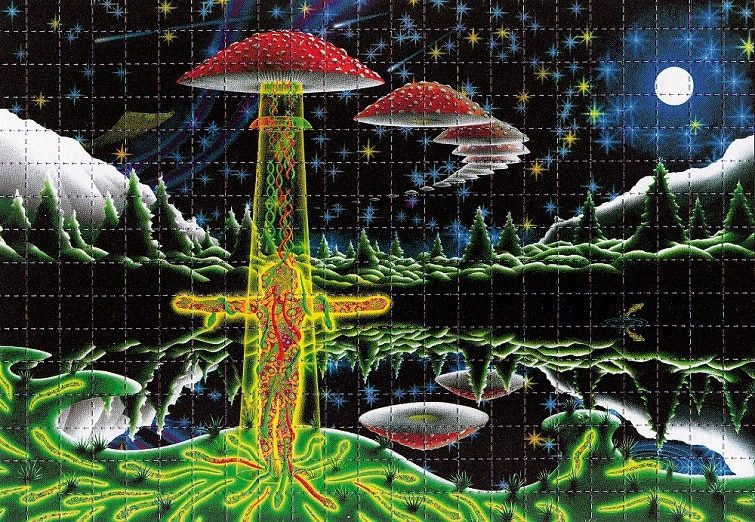 After the drug made its way into the mainstream, the government became aware of its effects and attempted to use the drug as part of a brainwashing scheme, MKULTRA, which involved psychological torture and the transformation of healthy men and women into sleeper agents.

Fortunately for us, the tests were fraught with difficulty and produced little in the way of desired results.
Seeing that psychedelics could not be turned to their advantage, and that in fact, they were causing a profound shift in the consciousness of America’s youth towards ideals of freedom, equality and unity, the United States government acted quickly to protect their vested interests in the war in South East Asia and their domestic war on black America, and banned the substances, spreading rumour after rumour on their supposedly harmful effects.

“LSD causes chromosomal damage, LSD makes you blind, gay, stupid, crazy.”
As Leary noted, LSD is a drug that causes psychotic reactions in those who have not ingested it.

For the last fifty or so years, the study and recreational use of psychedelics has been illegal or highly regulated, and as such we have fallen behind tremendously in our knowledge of the effects and possible beneficial uses of these bizarre and often very misunderstood chemicals.

Men like Alexander Shulgin, Rick Strassman and Rick Doblin have been tirelessly at work to return psychedelics to a position of legitimacy in our society, and have been making huge leaps in recent years with the rise of organisations such as PRISM, MAPS and the psychedelic conferences around the globe.
In our culture, psychedelics are making a resurgence, with more people using them than at any other time in history except, maybe, the sixties. They have become a mainstay of bush doofs, festivals and are even finding a following in healing circles, with ayahuasca tourism becoming a lucrative and booming industry.

So where do we go from here? What role can psychedelics play in the modern world? How do we use them in our own lives? What positives and negatives have we experienced from them? How do they relate to politics, to religion, to science, to art, to the human self? What can they tell us about perception, mood, and our deeper nature?

As a coach and “influencer” I am honored to speak with new people everyday who are ready to tap into the healing powers of psychedelics, ready to align more...
Psychedelics