A hemp-flavored edge to your morning joe?

Talk to anybody about Marijuana Coffee and they may refer to long existing establishments in Netherlands where licensed coffee shops have been serving it to customers for decades. However, the idea has firmly caught on in the United States, where pot-infused coffee is growing in popularity as more consumers are finally becoming informed on the beneficial properties of this amazing plant.


While pot-infused coffee will get you high, it still has to taste good. 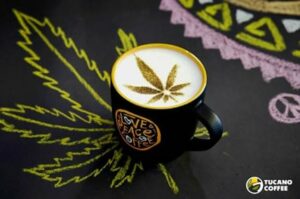 Los Angeles-based coffee company Compelling & Rich markets its Ethiopian Yirgacheffe beans as “herb conditioned.” They use a process called green coffee conditioning that exposes unroasted coffee beans to vaporized ingredients at a low combustion point, and then infuses the coffee with that flavor. To date, the company has used the process to create coffees infused with marijuana, oolong tea, and chai tea.

Coming out of Washington state, Fairwinds Manufacturing is now producing pot-laced coffee at its plant just across the Columbia River from Oregon. The company’s Catapult Cannabis Coffee ain’t cheap, going for $10 for pods that fit cartridge-based coffeemakers. Fairwinds’conventionally packaged cannabis coffees are a bit more reasonable.

And then there’s House of Jane and its Jane’s Brew Gourmet Cannabis-Infused Coffees.That’s just part of the Bay Area producer’s lineup of “medicinal gourmet coffees, teas, and fine edibles.” Jane’s markets its coffees as a way of relieving pain and stress, and offers caffeinated and decaf versions, as well as coffees with different THC and CBD levels. “You choose caffeinated or decaf and the dosage needed to meet your needs: focused and alert, or relaxed and mellow,” House of Jane says.

In many ways we are now at the cusp of an entirely new cooking revolution as cannabis cuisine is finally going mainstream. Cooking with cannabis is emerging as a legitimate and very lucrative culinary pursuit, while skilled line cooks are leaving respected restaurants to take more lucrative jobs infusing cannabis into food and drinks.

In Washington, one of four states that allow recreational marijuana sales, and a large cannabis bakery will soon open in Seattle.

For dispensaries, marijuana-laced coffee is extremely useful: It’s a high-sales margin novelty item that gets curious outsiders into their store. Much like marijuana-infused cakes or soft drinks, it offers sales possibilities that their more conventional products don’t have.

Hundreds of thousands of cannabis-based recipes have been shared on TheStonersCookbook.com since 2006.

And for those people who just don’t feel like paying $10 for a pod of cannabis coffee, you’ll find DIY recipes like this one online as well.

There is simply no doubting the health benefits of cannabis, particularly when it is ingested. But as more and more pot edibles pop up on the market, there are concerns that people will over-eat them and harm themselves and others, raising questions about how much cannabis regulation is needed (even though nobody has ever died from marijuana use). Marijuana is currently among the fastest-growing industries in the United States, and as legalization is inevitable across the country, it’s important to focus on adult consumption, and regulate accordingly.

Royal Seed Bank will show you how easy it is to grow your own marijuana at home, with as little time and effort as possible.

The Medical Benefits of Psychedelic Plants

4 Tips for Relieving Your Cat’s Anxiety

Your Buyers Guide to CBD Oil

A Guide to Dabbing Temperatures: Everything to Know

Have you ever tried hitting a dab but received no high from it? It's a more common event than you'd think. Most of the time, this happens because the wax...
Cannabis

How to Find the Best Wholesale Supplier For Your CBD Business